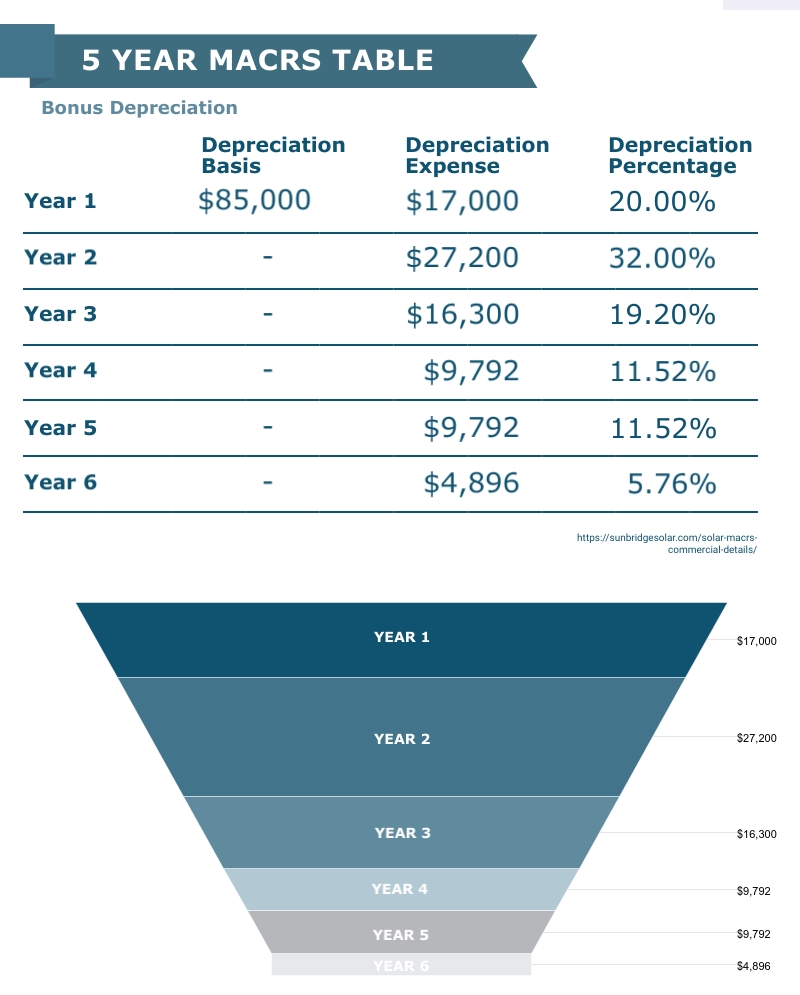 Note: The Tax Cuts and Jobs Act of 2017 increased bonus depreciation to 100% for qualified property acquired and placed in service after September 27, 2017 and before January 1, 2023.

Under the federal Modified Accelerated Cost-Recovery System (MACRS), businesses may recover investments in certain property through depreciation deductions. The MACRS establishes a set of class lives for various types of property, ranging from three to 50 years, over which the property may be depreciated. A number of renewable energy technologies are classified as five-year property (26 USC § 168(e)(3)(B)(vi)) under the MACRS, which refers to 26 USC § 48(a)(3)(A), often known as the energy investment tax credit or ITC to define eligible property. Such property currently includes*:

In addition, for certain other types of renewable energy property, such as biomass or marine and hydrokinetic property, the MACRS property class life is seven years. Eligible biomass property generally includes assets used in the conversion of biomass to heat or to a solid, liquid or gaseous fuel, and to equipment and structures used to receive, handle, collect and process biomass in a waterwall, combustion system, or refuse-derived fuel system to create hot water, gas, steam and electricity. Marine and hydrokinetic property includes facilities that utilize waves, tides, currents, free-flowing water, or differentials in ocean temperature to generate energy. It does not include traditional hydropower that uses dams, diversionary structures, or impoundments.

The 5-year schedule for most types of solar, geothermal, and wind property has been in place since 1986. The federal Energy Policy Act of 2005 (EPAct 2005) classified fuel cells, microturbines and solar hybrid lighting technologies as five-year property as well by adding them to § 48(a)(3)(A). This section was further expanded in October 2008 by the addition of geothermal heat pumps, combined heat and power, and small wind under The Energy Improvement and Extension Act of 2008.

Bonus Depreciation has been sporadically available at different levels during different years. Most recently, The Tax Cuts and Jobs Act of 2017 increased bonus depreciation to 100% for qualified property acquired and placed in service after September 27, 2017 and before January 1, 2023.

The 50% first-year bonus depreciation provision enacted in 2008 was extended (retroactively for the entire 2009 tax year) under the same terms by the American Recovery and Reinvestment Act of 2009 (H.R. 1), enacted in February 2009. It was renewed again in September 2010 (retroactively for the entire 2010 tax year) by the Small Business Jobs Act of 2010 (H.R. 5297). In December 2010 the provision for bonus depreciation was amended and extended yet again by the Tax Relief, Unemployment Insurance Reauthorization, and Job Creation Act of 2010 (H.R. 4853). Under these amendments, eligible property placed in service after September 8, 2010 and before January 1, 2012 was permitted to qualify for 100% first-year bonus depreciation. The December 2010 amendments also permitted bonus depreciation to be claimed for property placed in service during 2012, but reverted the allowable amount from 100% to 50% of the eligible basis. The 50% first-year bonus depreciation allowance was further extended for property placed in service during 2013 by the American Taxpayer Relief Act of 2012 (H.R. 8, Sec. 331) in January 2013. The Tax Increase Prevention Act Of 2014 (H.R. 5771, Sec. 125), extended  these provisions through to December 31, 2014, and thus retroactively for the 2014 tax year.

Click here to learn more about the incentives that help reduce the net cost of your commercial solar system.